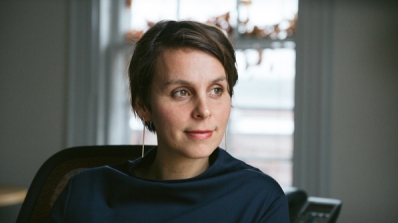 “How do we bear witness to a thing our bodies seem built to ignore? In Ashley Fure’s immersive music-theater piece, created with her architect brother Adam Fure and the International Contemporary Ensemble, 24 subwoofer speakers emit sound too low for humans to hear, creating a subsonic sense of ecological anxiety that ripples around the audience. Under a dense canopy of sculpted matter, tones are ‘made tactile, objects made audible, noise made beautiful’ (New York Times). Drama is steered away from the human, time is stretched to a geologic scale, and seven live performers act as wordless harbingers of a consciousness not limited to the living.”

The festival also includes a talk by Fure as part of a Composers' Forum on August 2:

"Composers Courtney Bryan, Ashley Fure, George Lewis, and Michael Pisaro, whose works will be performed during the Mostly Mozart Festival, join members of the International Contemporary Ensemble for a free discussion on their works, the creative process, and the future of classical music."

“Performances in which the audience and performers share exceptional settings are popular in New York, and Mostly Mozart rises to the occasion with the wordless drama The Force of Things, an immersive installation and musical landscape set up at Brooklyn's Gelsey Kirkland Arts Center (August 6–8). Composed by Ashley Fure, the work includes 24 subwoofers and live music played by the International Contemporary Ensemble, now in its eighth season as the festival's artists-in-residence. In a space designed by Fure's architect brother Adam, this music-theater experience is designed to make objects and materials part of the drama. ‘It functions equally as an art installation and a performance,’ Moss says.”