Music professor César Alvarez is known for ‘off the edge,’ playful work. 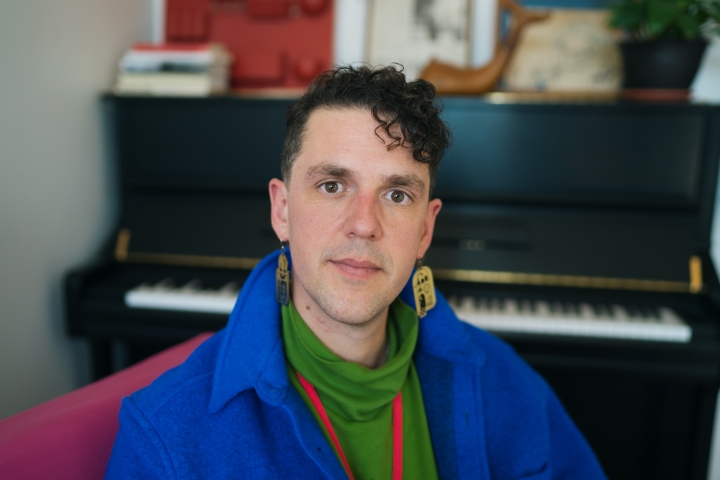 These are the kinds of characters audiences might encounter in a musical by Assistant Professor of Music César Alvarez, who has won the Kleban Prize for Musical Theatre for most promising lyricist in American musical theater.

The prize is awarded annually by the Kleban Foundation, which was created under the will of lyricist Edward Kleban, who wrote the Tony-winning lyrics for A Chorus Line. This year it carries a $100,000 cash award.

Alvarez, a composer and playwright who joined Dartmouth in 2020, called the prize “life-changing.”

“An award like this makes me feel like what I’m doing is resonating,” said Alvarez, who uses they/them pronouns. “It doesn’t make the self-doubt go away. It doesn’t make you able to write great songs every day. It’s just an incredible boost.”

Alvarez’s work includes five full-length experimental musicals, among them the Lucille Lortel Award-winner FUTURITY, about a Civil War soldier who tries to invent a machine that creates peace. Some involve audience members as co-creators.

In The Universe Is a Small Hat, the audience creates and designs their own characters—human refugees who escape Earth with the help of a collective of fugitive androids. César Alvarez performs in their musical FUTURITY at the Connelly Theater in New York City. (Photo by Yi Zhao)

With aesthetic roots in performance art, jazz, and popular music—Alvarez cofounded the indie rock band The Lisps—they are “a little bit of a permanent outsider” in the theater world.

Dissonant, unusual formally and dramaturgically, their work “falls off the edge of what people consider to be a musical,” said Alvarez, who cofounded Polyphone, a festival of new and emerging musicals at the University of the Arts in Philadelphia. Nonetheless, “it’s meant for a broad audience.”

Making “space for strangeness”—their shows feature aliens, ghosts, bugs, and talking plants—encourages people to think outside of the knowledge forms they’ve been given, said Alvarez, who uses sound and story to build community and create a sense of freedom.

I’m trying in my work to cause empowerment around who we get to be, and how.

“What’s so incredible about art is that it actually expands the possible in your own mind. I’m trying in my work to cause empowerment around who we get to be, and how,” said Alvarez, who was born in Greensboro, N.C., and studied saxophone at Interlochen Arts Academy.

‘A Type of Listening’

As an undergraduate at Oberlin Conservatory of Music, Alvarez continued studying saxophone, along with electronic music and interdisciplinary performance. They also started writing songs and large-scale multidisciplinary performances. But it was only around 2008, when they had nearly finished their MFA at Bard College, that they began describing their work as musicals.

“What I love about musicals is because they have a story, they cause a type of listening that is really hard to find in any other kind of music,” said Alvarez, who recalls being blown away by A Chorus Line, which they first watched on a tiny screen in the New York Public Library for the Performing Arts. “Sometimes I joke that I write musicals to get people to sit down and listen to my songs.”

Among Alvarez’s other musical theater honors are a Princeton Arts Fellowship and the Jonathan Larson Grant. Currently, they are a Hermitage Fellow.

Alvarez, a self-described “communitarian artist,” frequently collaborates with their partner—visual artist and sculptor Emily Orling—as well as other composers, including music professor Ash Fure, who said it’s “thrilling” to see Alvarez honored with the prestigious prize.

“Their work is expansive, irreverent, playful, earnest, and magnetic, just like them,” Fure said. “César lives and teaches as they make art: heart-forward and with conviction. I’ve seen firsthand the impact this energy can have on students, stoking self-expression, fostering community, and tending to the wild side in all of us.”

Being selected for the Kleban Prize, which is such a significant honor in the field of musical theater, Alvarez said, feels like an indication that the form is expanding.

“It makes me hopeful.”

A virtual ceremony honoring Alvarez and Isabella Dawis, who won the prize for most promising musical theater librettist, and featuring their videotaped performances, will be available for streaming Feb. 21 to 28 from Broadway On Demand.