Cooking Up a Concert—With Rice 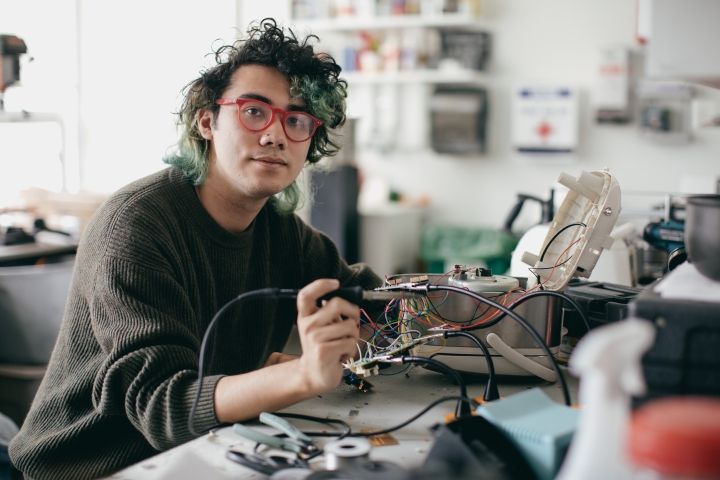 At the end of this month, Trevor Van de Velde, Guarini ’22, a graduate student in Digital Musics, will switch on a cluster of rice cookers, not just to serve a meal, but to make music.

Arduino is an electronics platform that receives inputs from sensors and can control activators, including lights and sounds.

Here, in simplified terms, is the recipe for Van de Velde’s multi-media installation.

The idea for the installation bubbled up in Van de Velde’s family’s kitchen in Fresno, Calif., during a COVID-19 lockdown. Van de Velde, who is Chinese-American, became fascinated by his mother’s rice cooker, “a fancy appliance that, whenever you press ‘start,’ plays music.”

Nothing wrong with hearing a little tune as you wait for rice to cook, he thought. But the repertoire seemed out of sync with his Asian heritage.

“How come it always played Western classical music?” he wondered. “These appliances, they could sound like anything. I wanted to rip out the little speaker and insert my own sounds and expand its capability into a fully working music instrument capable of musical expression.”

Which is exactly what he’s spent the last few months doing, in his studio at the Hop. Grains of rice placed in speaker cones play a key role in the music. (Photo by Robert Gill)

With his thesis project, Van de Velde says he wants to pay respect to the cultural significance of rice. “In a lot of East Asian languages, the verb ‘to eat’ contains the word for ‘rice.’ So for us, it’s a grain at the core of humanity” he says.

Before the pandemic hit, Van de Velde loved giving dinner parties. “It was my favorite thing to do, because the power of eating a meal with other people is so beautiful. I wanted to bring that into the classical music scene, using the rice cookers as a cultural technology that brings people together in a form of communion.”

At 8 p.m. on April 30 in Room 58 in the basement of the Hopkins Center for the Arts, he’ll serve up a one-of-a-kind sonic feast. And he’ll also dish out the cooked rice at the end of the performance.

Admission is free, but registration is required.