Brazilian violinist Omar Chen Guey has performed internationally as a soloist with orchestras, in recitals and chamber concerts throughout Brazil as well as the United States, Europe, Qatar, Taiwan, Kenya and the Seychelles. He has been a featured soloist with the Brazilian, Campinas, Goiania, Minas Gerais, Claudio Santoro National Theater, Sao Paulo University, Sao Paulo Municipal, and the State of Sao Paulo Symphony Orchestras, as well as the Amazonas Philharmonic, Petrobras Pro-Musica, Experimental Repertoire, Qatar Philharmonic, Manhattan School of Music, Stony Brook University Symphony, Maidstone Symphony and the Seychelles International Music Festival Orchestras. Following a recital in Oslo, Norway, he had the honor of performing for the King of Norway, Harald V. He is a prizewinner at both Tibor Varga and Lipizer International Violin Competitions in Switzerland and Italy, respectively. In 2019, He performed the Britten Violin Concerto with the Fribourg Youth Orchestra in Switzerland. During the pandemic, he has streamed from home, recitals for solo violin and with his wife at the piano.

Mr. Guey premiered the Violin Concerto by Jean-Charles Gandrille with the Qatar Philharmonic. This performance has been released on the French label Paraty. He released the Bach Concerto for Two Violins on the Paulinas Label with the Brazilian soloist Elisa Fukuda and the Camerata Fukuda, of which he was also concertmaster. He premiered and released a work for solo violin of renowned French Lebanese musician Marcel Khalife on Nagan records. He participated in the Isaac Stern Chamber Music Workshop and has collaborated with renowned musicians such as Lynn Harrell, Ani Kavafian, David Finckel, Lawrence Dutton, Kikuei Ikeda and Colin Carr.

He is a member of A Far Cry, a two time Grammy nominated self conducted chamber orchestra. A Far Cry performs multiple different programs in Boston each season and has toured extensively throughout the USA, Canada and Austria. He is the assistant concertmaster of the Rhode Island Philharmonic and member of the New England Camerata Trio, which performs several chamber concerts in Vermont and New Hampshire each season. He is a regular guest artist with various ensembles around Boston, including the Walden Chamber Players, Radius Ensemble, Dinosaur Annex, Boston Lyric Opera, Odyssey Opera and the Monadnock Music Festival, among others.

Mr. Guey holds a Doctorate degree from Stony Brook University, a Masters from Juilliard and a Bachelors degree from Manhattan School of Music. His principal teachers were Sylvia Rosenberg, Robert Mann, Philip Setzer, Ani Kavafian, Pamela Frank and Elisa Fukuda. He was awarded a full scholarship from the Brazilian government, the Juilliard School and the Aspen Music Festival Fellowship. He was assistant concertmaster of the Orquesta de la Comunidad Valenciana, in Valencia, Spain, under the direction of Lorin Maazel. He has served as concertmaster of the Jerusalem International Symphony Orchestra in Israel, and guest assistant concertmaster with the Mahler Chamber Orchestra and the Norwegian National Opera and Ballet.

Mr. Guey has taught violin as Lecturer in the Department of Music of Dartmouth College since 2020. 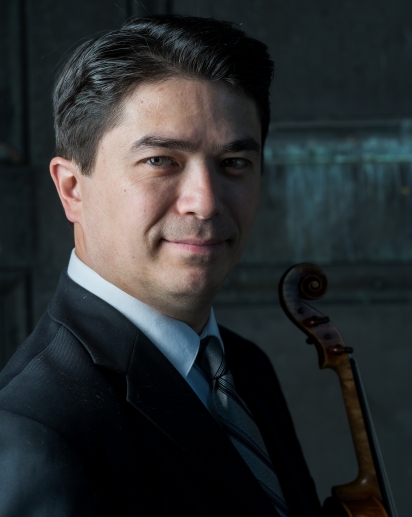