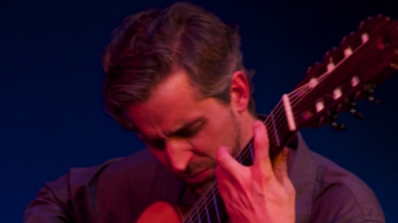 Africa by Salif Keita, arranged for 12 guitars and rhythm section.

I lieu of our normal year-end recital, on which we normally play one or two guitar ensemble pieces, the MUS 56 students of Jason Ennis undertook a  virtual ensemble project. Inspired by the opportunity to work with members of the band of Angelique Kidjo, who was scheduled to perform at the Hop in April 2020, we chose the tune "Africa" by Malian musician/activist Salif Keita, known as "The Golden Voice of Africa" and one of the leading voices in Afro-Pop.
Our arrangement was based mostly on Keita's 1995 studio recording, Folon… "The Past," but also drew on a few live performances. This was a fantastic opportunity to learn from the masters of this style, as we attempted to emulate the vocal phrasing of Keita and the background vocalists, adapt the keyboard and horn backgrounds, and dig deeply into the interlocking grooves and solo lines of the guitar parts, played originally by Malian guitar master, Ousmane Kouyate.
Thanks to support from the Hopkins Center and the Music Department, we were able to record with a top-notch rhythm section: Chilean drummer and current Angelique Kidjo band member, Yayo Serka; bassist, producer, and former Kidjo band member, Ben Zwerin; on percussion, we were joined by Zimbabwean multi-instrumentalist and director of the Zambezi Marimba Ensemble at Williams College, Dr. Tendai Muparutsa.
Guitarists featured are: Sam Tabrisky  '22, Alex Tewksbury  '20, Peter Chabot '22, George Christopher '20, Andrew Li '20, Trevor Briggs '20, Zander Hirsch '22, Doug Vetter '21, Will Gerrish '22, Matt Keating '23, and Carson Peck '22.
Visit the Music Departent's YouTube channel to view the virtual performance video.